Navaratri Golu (also spelled as Kolu) is the festival of dolls associated with worship of divine Mother across 9 nights. Kolu is a popular festival of south India, particularly in Tamil Nadu. It begins on the first day (Pradhamai) after new moon (Amavasya) in the Tamil month Purattasi (September-October) and ends with celebrating Vijaya Dasami on the 10th day. Navrathri is essentially to worship divine mother Parasakti, to commemorate her victory over evil forces represented by demons like Mahishasuran, Madhukaidapan and so on.

Every Hindu festival is aimed at turning people’s mind from the mundane to the divine. Practicing of austerities, conducting worship, singing hymns in praise of God and seeking blessings from elders – all these aspects of religious practices are interwoven with every festival. In order to make every one to participate with enthusiasm, particularly the youth and young children, fun and frolic too are added in the right measure. Golu is one such festival, where there is considerable fun and joy for youngsters and children.

But unfortunately, over the passage of time, the religious elements of the festival gets considerably sidelined and only the fun, pomp and glittery tend to take predominance. Golu is one such festival which is sinking to fit into this stereotype.

A typical Golu – display of dolls

Even in my childhood days (some 50 years ago), when I enjoyed the Kolu festival to the hilt in my village, I could observe that the Bhakti (devotion) aspect was given a step-motherly treatment. It is needless to mention to-day’s state of affairs.

I have very vivid memories of celebrating Kolu in my childhood and I shall share some of them here; the festivities remain more or less same even today except for more glitter and pomp that have got added in good measure, particularly in cities. After my children grew up, myself and my wife took a conscious decision to stop celebrating Golu in our house.

During my childhood, we children would start feeling the excitement of arrival of Golu at least a week before the actual commencement. Vendors of Clay dolls would keep repeatedly visiting the village and children belonging to well-to-do families would always pester their parents to buy a couple of new dolls for the festival. Our household belonged to the middle class category, where wallets were never fat enough to splurge on such things. If we could manage to add one of two new dolls once in two years, it was something to feel glad about.

A day or two before the beginning of the festival, two large wooden boxes stored in the attic would be brought down; The packing would be carefully opened by the elders, while we children would watch with excitement. Dolls carefully packed in old cloths and newspapers would be taken out one by one, dusted and polished. It would be as though we were meeting our close relatives after a gap of one year!

Every one would have his/ her own favorite dolls. Dolls would be mostly of Hindu Gods – Krishna, Devi, Mahalakshmi, Saraswathi, Shiva and so on. There would be special sets of dolls too: Like the “Rama pattabhishekam” – crowning of Lord Rama seated in throne under a beautiful umbrella, with his wife Sita, brother Lakshmana and servant Hanuman. There would be “marriage set” depicting a typical Hindu marriage – a bride, groom, priest, music players etc; Dasavataram set depicting the 10 Avatars of Lord Vishnu and so on. There would also be dolls of animals, a fat “Chettiar” (grocery trader), and the inevitable “Marapachhi” (very poorly crafted wooden dolls, generally carried in the families across several generations).

Then we would have a box of “children specials” – little dolls made of plastic and porcelain of assorted items boy and girl dolls, animals, birds, ducks, trees, chairs, tables, lamp posts, all meant for placing in a “Park”, an exclusive display area for the children in the Kolu.

Golu involves display of dolls neatly arranged in the main hall of a house over a makeshift arrangement of steps (similar to staircase). The number of steps are normally odd in number. The steps are either created by using odd collection of benches, tables, boxes and even bundles of books and magazines by judiciously stacking them one over the other. This practice is rather an old technique. Ready made stair-sets (Golu stands) are now widely used, which can be dismantled once the show is over. In our household, we could not afford to buy a standard stair set and hence our father always used his ingenuity in utilizing the domestic furniture to build the stair case.

The stair was then covered neatly with white cotton cloth and the dolls placed neatly and thematically well spread across the various steps. My mother’s favorite doll – a Gajalakshmi (Goddess Lakshmi escorted by 2 elephants on either side) always occupied the top most prominent position in the Golu. No one would ever dare her to relinquish that coveted position to any other doll!

Then comes the construction of the park at the floor, right in front of the bottom most step, covering an area of about 2.5 feet by 4 feet. River sand, specially brought and stored for this purpose would be evenly spread to half-an inch thick in this area. The four edges of the park would have an embankment of sand about 2 inch thick and 3 inch wide. Previously soaked and sprouted seeds of mustard, green gram etc would be evenly sprinkled on this embankment and sprinkled with water. In the next 3,4 days they would grow beautifully to small plants, adoring the park.

No Golu is complete without a “Park” inside!

One of the greatest attractions of the Kolu of our house for the fellow children of our village was the creative and crafty skills of my elder brother. He had a pair of very deft hands and a wondrous imagination to create dolls from cardboard boxes, metal and other domestic scap items. He once made a beautiful bus and a truck this way. On another occasion he made a helicopter. I still vividly remember how painstakingly he made them out of available scrap items, color papers and water colors with great attention to details and nuances. He would never spend a single penny to buy any item needed for the purpose.

His dolls were always crowd pullers to our Golu those days.

Kolu festival is synonymous with the “Sundal prasad” in the evening. Sundal is a delicious eatable prepared from boiled “dhals” (grams) rich in protein. Every day the basic dhal used will be different. After offering it to the deities in the Kolu, Sundal will be distributed to the visitors.

Little girls would wear their best attire every evening, go with a little cup containing kum-kum (Sindhoor) from house to house and invite ladies and children to visit their house’s Golu. Some parents would painfully make up their little girls to look like Radha or Krishna and such children would instantly become centers of attraction in the village.

Golu is essentially a function for little girls and women in their best attaire!

Going from house to house is the prerogative of girls and women. It is a great occasion for women to socialize and showcase their newly acquired dress or gold. Girls and women who visit Golu are always goaded, encouraged and sometimes even harassed to sing devotional songs sitting in front of the Kolu. So, girls normally start rehearsing their limited repertoire of songs days before the start of Kolu, to the irritation and annoyance of their little brothers!

Being a function dominated by girls and women, boys were generally discouraged from going from house to house like girls. One to one visit to close friend’s houses to see Kolu was permissible! As a boy, with such adventures restricted, I would eagerly await the return of my sister from her rounds so as to taste the assortment of Sundals collected from several houses! 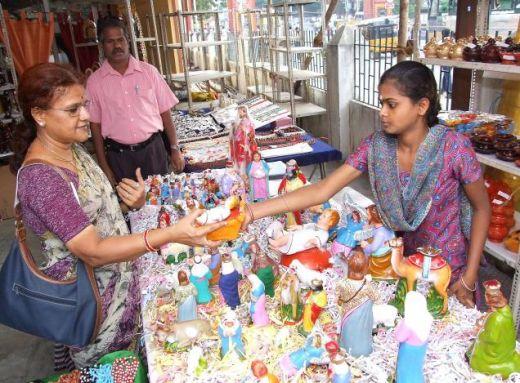 The Gang War and the Truce

Getting Fired from Your Job – Watch for the Warning Signals Beforehand

C.V.Rajan - July 19, 2020 0
If you are attentive enough, you can hear distant rumblings of a thunder before rainy clouds reach above your head to bring...

Remembering My Father — how an unassuming simpleton could inspire his son

What best advice can you give for people in the age group 30-40 based...

C.V.Rajan - May 30, 2020 0
Earn decently and save for futureDon't get into any loan trap. Buy with debit card and never with credit card.Spend quality...

Childhood memories – they are precious and Joy filled

The sewing machine and the scissors

Oh for a cup of coffee!